Why Turkey’s machinery trade is one to watch

The Turkish machinery industry has grown robustly over the past decade, achieving approximately a 5% compound annual growth rate (CAGR). In this article, our engineering experts investigate what it is that makes Turkey one of the top performers in the world machinery trade.

Statistically, Turkey is now the 13th largest economy in the world; its geographical proximity to some of the machinery sectors highest growth markets make it a convenient base as a managing and manufacturing hub. Turkey is in fact Europe’s 9th largest manufacturing base, with in excess of 240k employees and $1Bn of exports.

Turkey shares a customs union with the 26 EU states, it also has agreed free trade agreements with an additional 28 countries. This strong and international supplier base has seen Turkey enjoy the 3rd largest local market growth in the world, only behind China and India. 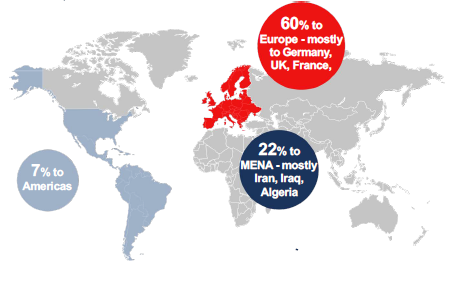 The focus of the 2020 International Energy and Environment Fair (ICCI) is ‘change and transformation in the energy market’, although Turkey has quadrupled its exports since 2003, it has also tried to protect itself from market shocks and prepared itself for future changes. One way it has done this is by diversifying its export markets, rather than relying on Europe it has increased its distribution into the Middle East and North Africa and also the Americas.

It is well documented that the UK suffers from an aging workforce; the contrary is true in Turkey with over half of the population less than 30 years of age. This gives it a dynamic, young workforce, which will grow in number year on year.

With all the aforementioned growth it is of little surprise that Turkey is Europe’s fifth largest energy consumer. However, in a bid to improve its green credentials, it is also one of the world’s largest growing renewable energy markets with an aim of increasing its share of renewables to 30% by 2023.

Turkey is definitely on a positive trajectory; the country’s efforts to underpin the current growth and to futureproof its ongoing prosperity are commendable. As an example, the country’s production of pumps and compressors has increased by 50% in the past decade. To reinforce and protect this growth – and most importantly retain its competitiveness – the country has strongly invested in strengthening its industrial base. Machinery sector investments in particular are considered a priority and can often benefit from lucrative incentives.

Turkey has also worked hard to strengthen its education system to ensure a consistent supply of skilled workers able to fill the growing number of employment opportunities. This cost competitive labour force has been a lynchpin in ensuring large multinationals such as Boeing had the confidence to bring its National Aerospace Initiative headquarters to Turkey.

As we enter a new decade Turkey has just three years remaining to achieve its documented vision for 2023. With the current level of investment, foresight and tenacity we have confidence the country will continue to go from strength to strength.

The ETC engineering experts have numerous solutions suitable for the Turkish market. Simply, get in touch to discuss your project requirements?