Is UK automotive manufacturing teetering on the edge of crisis?

Leading UK and Ireland union, Unite, has cautioned that UK automotive manufacturing is approaching an emergency situation. This update followed the publishing of economic figures showing that UK manufacturing has shrunk 3.9 per cent with motor vehicle production plunging by a record 24 per cent in 2020.

The brakes were put on British car manufacturing in April, with production down 99.7% against the same month in 2019, it was the lowest output since the second world war. In this blog our experts explore the effects of the Covid-19 pandemic on UK car manufacturing and whether the UK is ready for the switch to electric cars. 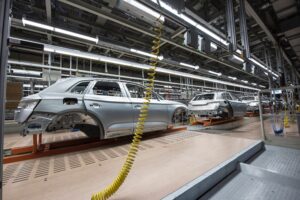 The UK is proud to be the fourth largest vehicle manufacturer in Europe, with nearly a decade of experience in electric vehicle (EV) battery cell and pack production. However numerous other European countries are focused on stepping into the UK’s shoes as leaders in this field. Germany, Sweden, Poland and Hungary have emerged as key competitors, creating favourable business conditions to attract battery manufacturers. Germany, for example, has recently announced a €1 billion federal support programme for EV battery production.

Mike Hawes, chief executive of the Society of Motor Manufacturers recently said manufacturing had been “battered” by Brexit and Covid-19, and now faced “the unprecedented challenge of a complete shift to electrified vehicles in under a decade.” (1)

Is UK manufacturing ready for the move to electric vehicles?

Electric vehicles are rapidly growing in popularity, thanks in no small part to massive industry investment – in 2019 over £54billion was spent on the promotion of electric vehicles. Supply is definitely keeping up with demand; in the last 12 months, the number of available plug-in hybrid and full electric models has increased dramatically from 62 to 83, with more scheduled for launch in 2021.

However, car manufacturing in the UK has been hard hit by both Brexit and Covid-19 and this new direction will require strategic planning. Richard Bartlett-Rawlings, audit partner at RSM UK, has stated that: “The automotive manufacturing industry in the UK is worth more than £100billion per year supporting a wide supply chain and is a world leader for research and development. What is clear is the sector needs targeted Government support, as the next few months will be make or break for many in the industry.”(2)

What are the risks associated with the move to electric vehicles?

The speed of this change is always difficult to predict. But in the absence of any gigafactories producing batteries and associated EV manufacturing, the UK would begin to lag behind its European competitors. In a worst-case outcome, if large-scale UK battery production cannot be secured, domestic vehicle producers could gradually wind down their production of internal combustion engine vehicles. This wind down would put at risk the jobs of 186,000 people directly employed in the UK automotive sector.

The switch to electric should be fairly straightforward from a technical perspective, the Nissan Leaf is built in Sunderland – with imported battery cells from Japan – and has been the best-selling electric car in Europe!

The lynchpin of success will be the battery cell production; if the UK can become leaders in this field building successful gigafactories to handle EV parts manufacturing, then this could be a boom for the UK creating new jobs and stimulating the economy.

Signs are promising, as it was announced just before Christmas that a Northumberland site had been secured for the UK’s first EV battery gigafactory. The facility – located in Blyth, Northumberland – will begin construction this summer and plans to produce “world-class” lithium-ion batteries by the end of 2023.

All eyes will be focused on this new gigafactory as it is strategically incredibly important for the UK automotive industry. If successful, it will help to maintain competitive advantage as the UK accelerates towards an increasingly electrified future.

To speak to ETC, UK manufacturers with proven expertise in combustion boilers please get in touch.