Energy Technology & Control has been a global leader in the design and development of combustion controls and burner control technology for an impressive 30 years. To mark the occasion, ETC has created an infographic outlining some of the most notable dates in the company’s history.

It is fitting that the first date of interest should be the date of the management buyout in 1988. The next decade was a busy one as ETC started to build its reputation and gain traction in the electronic burner controls market, firstly securing European approval for the ETC3000 electronic air fuel ratio controller, before launching it in the UK market a year later.

In 1998 the ETC3000 electronic air fuel ratio controller received USA, UL and FM approval allowing ETC to enter the US market represented by Fireye Inc. In the same year the company were thrilled to receive the highest official UK award for British business – the Queen’s Award for Environmental Achievement – for the combined combustion of base and waste fuels offered by the ETC3900 burner control. The 90s ended on a high with approval received for ETC’s first fully integrated burner control system, the ETC1200, in 1999.

The millennium saw ETC set its sights on the world stage; in 2000 the ETC3000 burner control received Australian AGA approval, allowing ETC to market its products on the other side of the world. In 2006 the ETC6000 burner management system was launched – quickly receiving European approval – and leading to ETC’s first project with HP-Consulting in Germany in the following year. 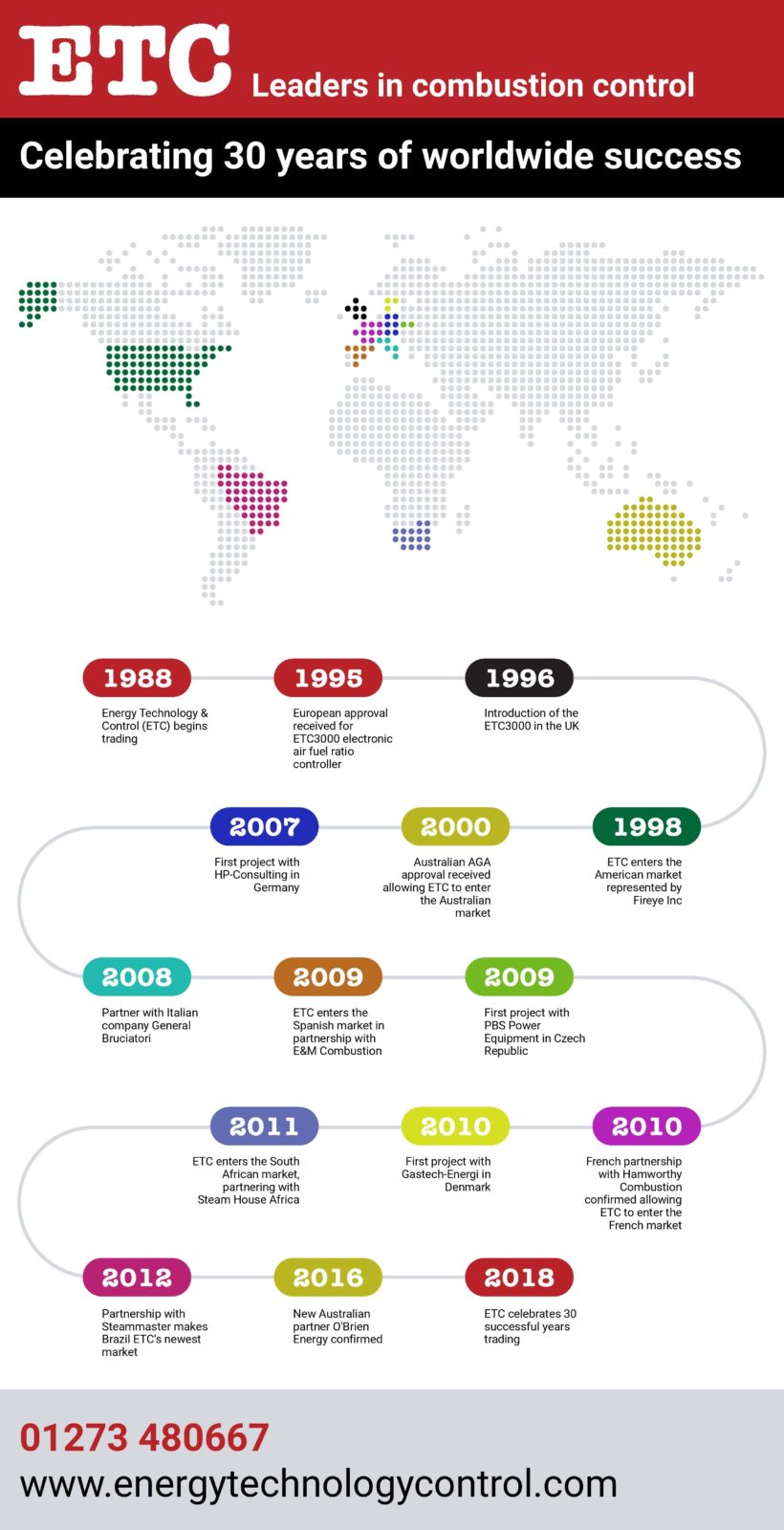 In 2008 the ETC6000 series burner management system received UL, FM and AGA approval. This led to partnerships being established with; Italian company General Bruciatori in 2008, Spanish company E&M Combustion and Czech company PBS Power Equipment in 2009, the following year ETC agreed partnerships with Hamworthy Combustion in France and Gastech-Energi in Denmark, finishing 2010 in a strong position with its burner controls and burner management systems being fitted throughout Europe and beyond.

In 2011 ETC strengthened its position in Italy securing a second partnership with Italian OEM Bono Energia. The company also added two new models – the ETC6008 and ETC6009 – to the established ETC6000 series burner management system range of combustion controls. The ETC6008 & ETC6009 are designed to address applications where bio and waste fuels are being used. The year closed on a high with a partnership being confirmed with Steam House Africa in South Africa, opening the door to the sizable African market.

The ETC6003 burner management system integrated controller for dual gas burners was launched in 2012, the same year that ETC partnered with Brazilian company Steammaster, its first South American partnership. In 2013 ETC strengthened its position in France, establishing a partnership with Cometi Services, this saw it responsible for supplying most existing Hamworthy France sites.

The last five years have seen ETC strengthen its position in Australia, securing a second partnership with O’Brien Energy. The company has also launched exciting new products including, the ATEX Zone 2 actuators and the Class 1 Division 2 actuators.

Now with over 30 years of experience ETC is looking forward to solidifying its position in its current markets and extending its reach into new territories. Contact the team to find out more about the company’s range of burner control products.